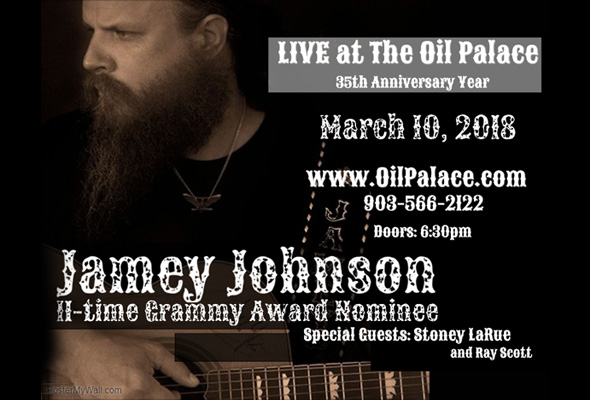 February 9, 2018 (Tyler, Texas) - StarPro Public Relations and Kevin Barbaro Productions announce the grand re-opening of the East Texas venue The Oil Palace with a star-studded show featuring Jamey Johnson along with special guests Stoney LaRue and Ray Scott on Saturday, March 10 at 6:30 PM. After closing for nearly a year, while undergoing a $2 million renovation project, the venue is eager to debut its modern glory to celebrate its 35th anniversary year. To highlight this exciting reformation, The Oil Palace is happy to headline Jamey Johnson in their first concert since the renovation project began. For tickets to the show, click here.

"We are excited to bring The Oil Palace back to life,” says owner Bobby Manziel. “This new renovation has been needed for years and we wanted to give the community even more reason to be excited about the venue.  We are focused on making The Oil Palace one of the top venues in the country and reliving the success we enjoyed for decades."

The $2 million dollar renovation project included a complete remodel of all bathrooms, all new inside and outside LED lighting, a refurbished roof, a new bar and concession area, a new entry and ticketing area, new landscaping and a paved parking lot. The multi-purpose arena has exciting plans to continue to add to the 2018 event schedule. Keep up with us atwww.oilpalace.com.

About The Oil Palace:
The Oil Palace is the East Texas Events center complex which provides customized services of event management depending on the needs of our valuable clients. The Oil Place is the leading Tyler Texas Entertainment center around the city, which is capable enough to handle any type of events ranging from concerts, trade shows, fashion shows, private parties, speaking engagements, dance events, wrestling, boxing, weddings and anything which one can imagine. The 6,960-seat multi-purpose arena is located on Texas State Highway 64 just outside the eastern city limits of Tyler, Texas. For more information, visit the website at www.oilpalace.com.

Kevin Barbaro Productions and StarPro PR are the official booking, promotions, marketing and Public Relations agency for The Oil Palace.

About Jamey Johnson:
Eleven-time Grammy-nominated singer-songwriter Jamey Johnson is “one of the greatest country singers of our time,” according to the Washington Post. He is one of only a few people in the history of country music to win two Song of the Year Awards from both the CMA and ACMs. His 2008 album, That Lonesome Song, was certified platinum for 1 million in sales, and his 2010 ambitious double album, The Guitar Song, received a gold certification. In addition, he won two Song of the Year Trophies, for “Give It Away” and “In Color,” both from the Academy of Country Music and the Country Music Association. He has received tremendous praise from The New York Times, Rolling Stone, The Wall Street Journal and other publications, many of which have hailed his albums as masterpieces. Keep up with Jamey on his website at www.jameyjohnson.com.